The End is Nigh and Delicious

In Europe, researchers include 12,000 non-native plant and animal species that have been introduced by humans since Columbus sailed across the Atlantic at the end of the 15th century. Of these, 10 to 15 percent are considered invasive, thus threatening biodiversity or the land, forestry or marine economy. This percentage includes the Pacific Oyster. It likes to spread where mussels grow and eliminates the black shell's population. This oysters shell is so hard that the native and local seabirds can not crack them. Birds like the Common Eider, which is a migratory bird and passes through German North Sea coasts on it's trail to the North or the Eurasian Oystercatcher which is native to the mudlands of the North Sea and has developed a specialized beak to crack the Atlantic Oyster, both grow desperate in finding food now.

Anyway, you could say nature is changing. But there is something else, an uncanny thought that the researchers exploring biodiversity have been discussing in their journals for several years, more an inkling than a certainty, a gloomy future story of which no one yet knows how it will end up for the human species. It is about the sixth mass extinction of the earth's history.

Five times during the earth's history, a large part of all species on the globe has died out due to climate change or changes in the atmosphere. Big Five are called these partial apocalypses. The most recent event triggered a meteorite 65 million years ago. More than three quarters of all species were then probably extinct, most prominent victims: the dinosaurs. And today, perhaps, we are at the beginning of the sixth mass extinction, triggered by the species that holds the most intelligent of all: Homo sapiens. Man destroys the habitat of animals and plants in many places. And it transports species into every corner of the world where they displace native species. The big question is whether our species is thus preparing their own extinction.

Eggert/ Ricklefs have created an aluminum cast, which resembles an "oyster cluster", a lump of Pacific oysters, as they blend together naturally in open water, when unattended and not farmed. Although having an amorphous shape this cluster out of aluminum appears like a magnificent, baroque cup with a floral variety of forms and provides at the same time as a receptacle for a large bowl out of deep-drawn clear plastic. For the opening of the exhibition "Lush", the artists served a special drink from the vase which, in its consistency and color, evokes the spawning liquid of oysters for sexual maturity. The actual recipe is a somewhat traditional punch of north German schnapps, lemonade and vanilla ice.

Titled “One is too many and a hundred ain't enough“ the sculpture sits on top of a workshop board like plinth intriguingly crafted out of drift wood washed up the Biscayne Bay in Miami, where Eggert/ Ricklefs stayed as artist-in-residency at the Fountainhead Residency. A dark shiny matter covers the table top as if the baroque cup has just risen from a dark abyss.. 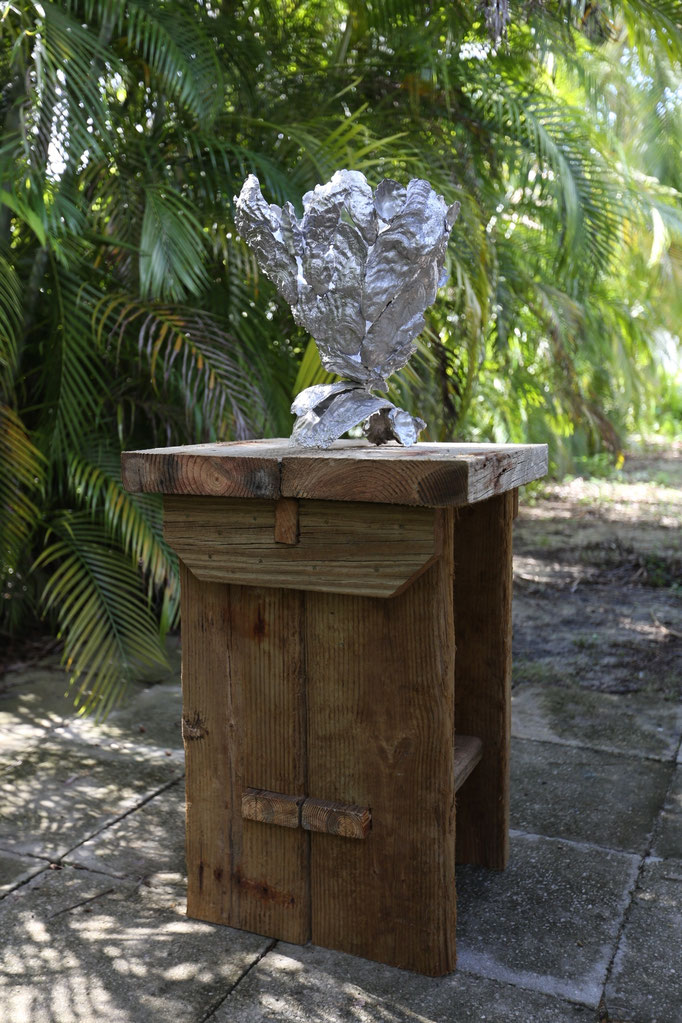 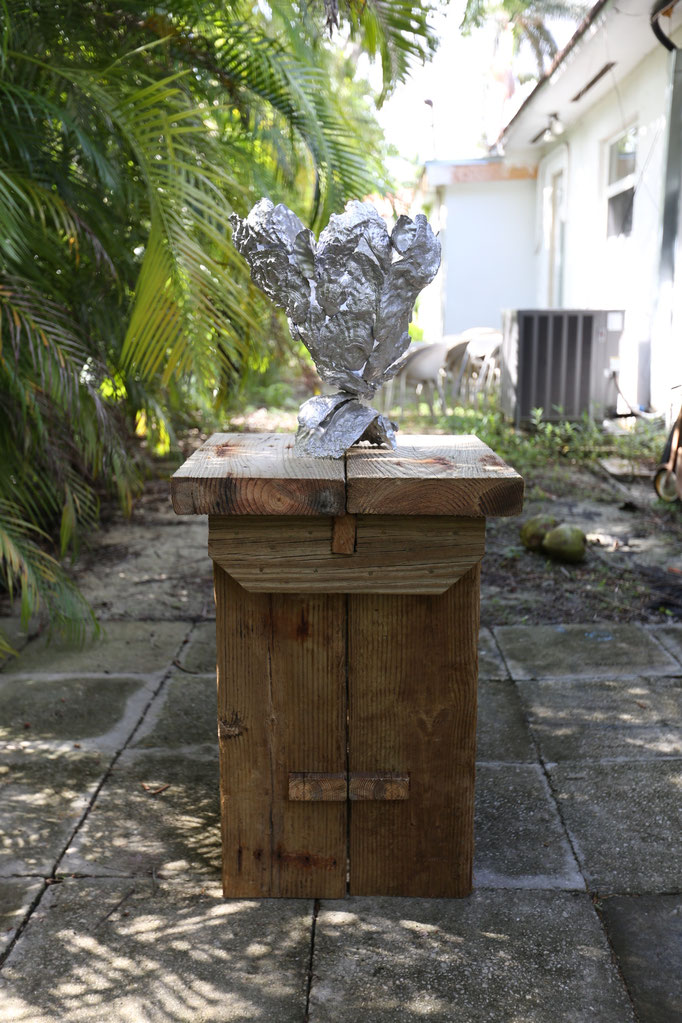 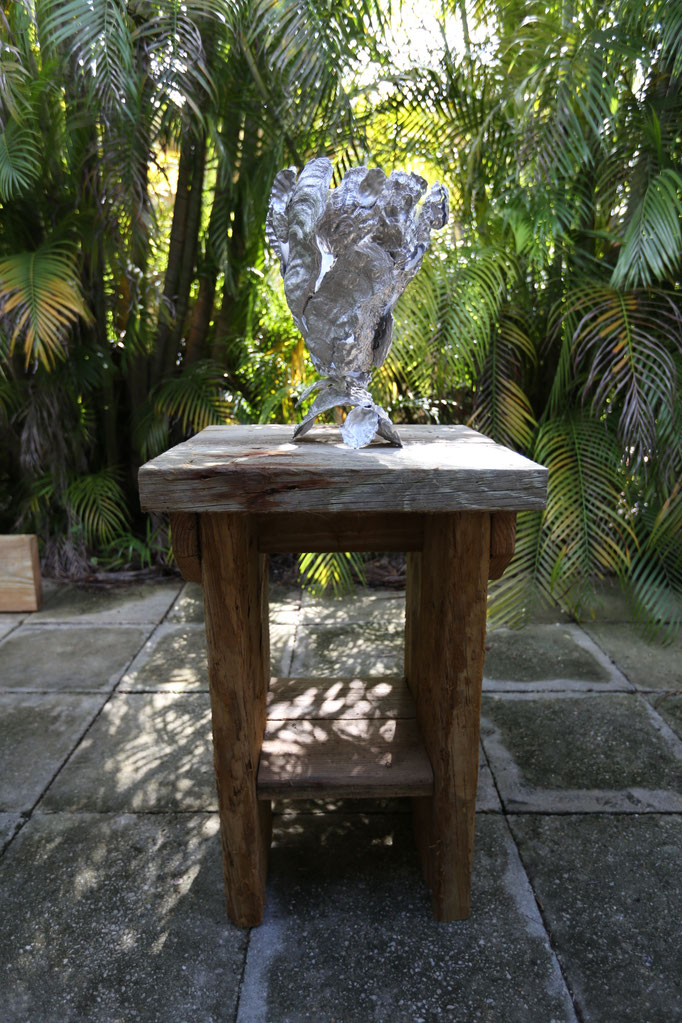 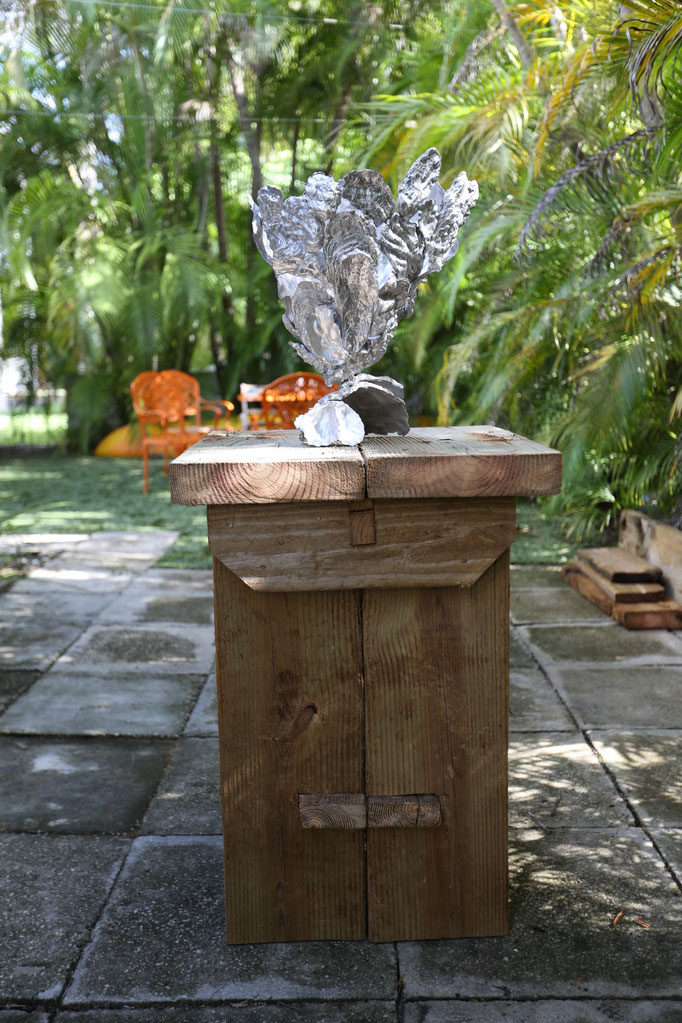 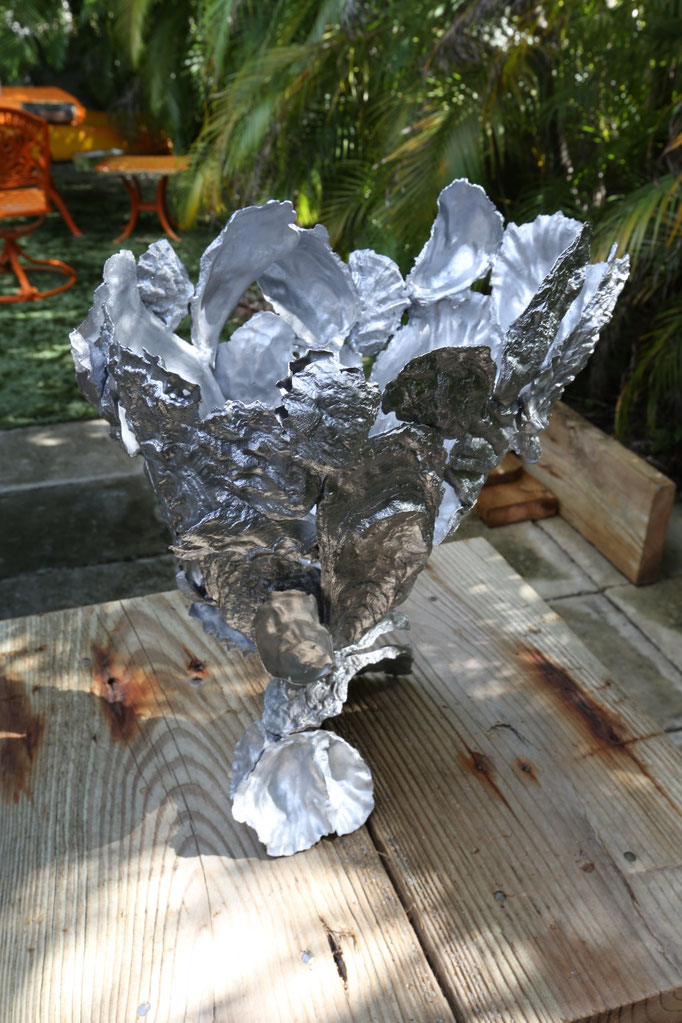 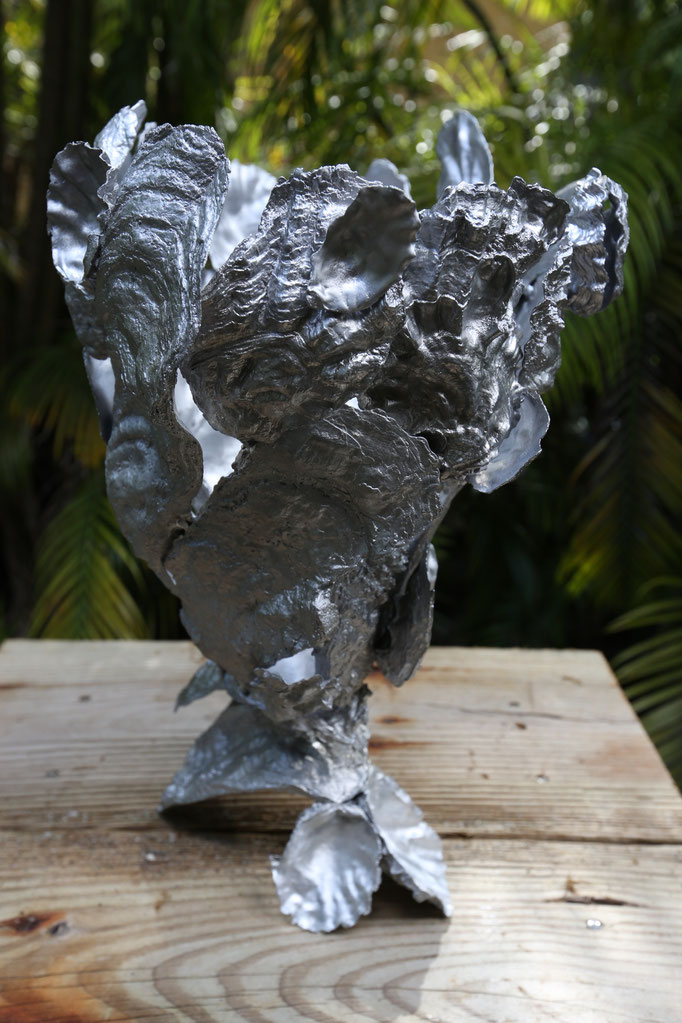 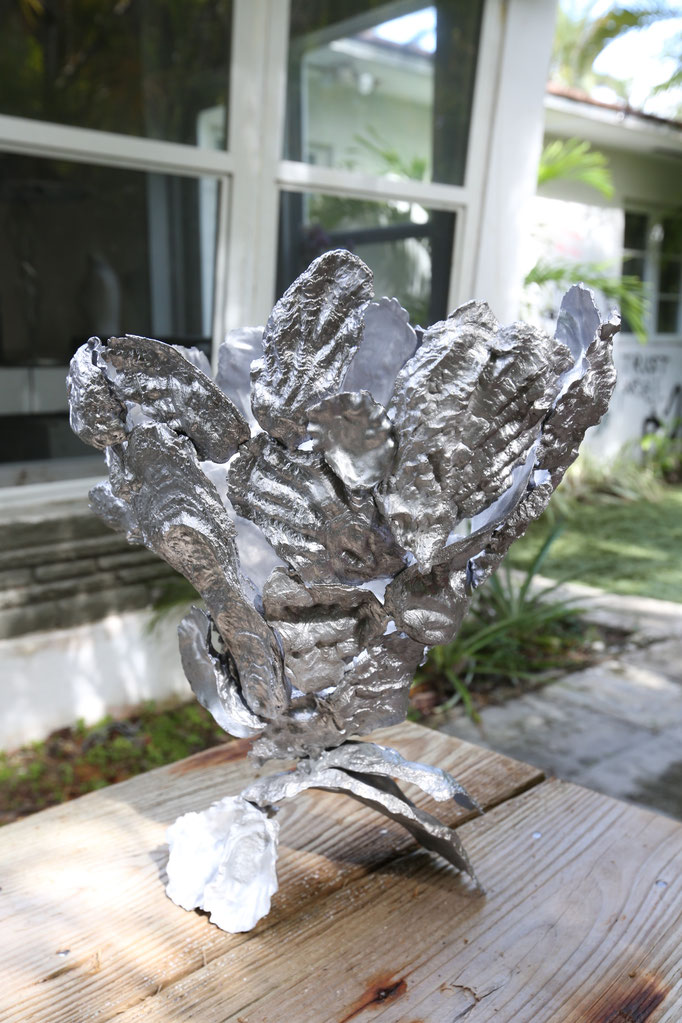 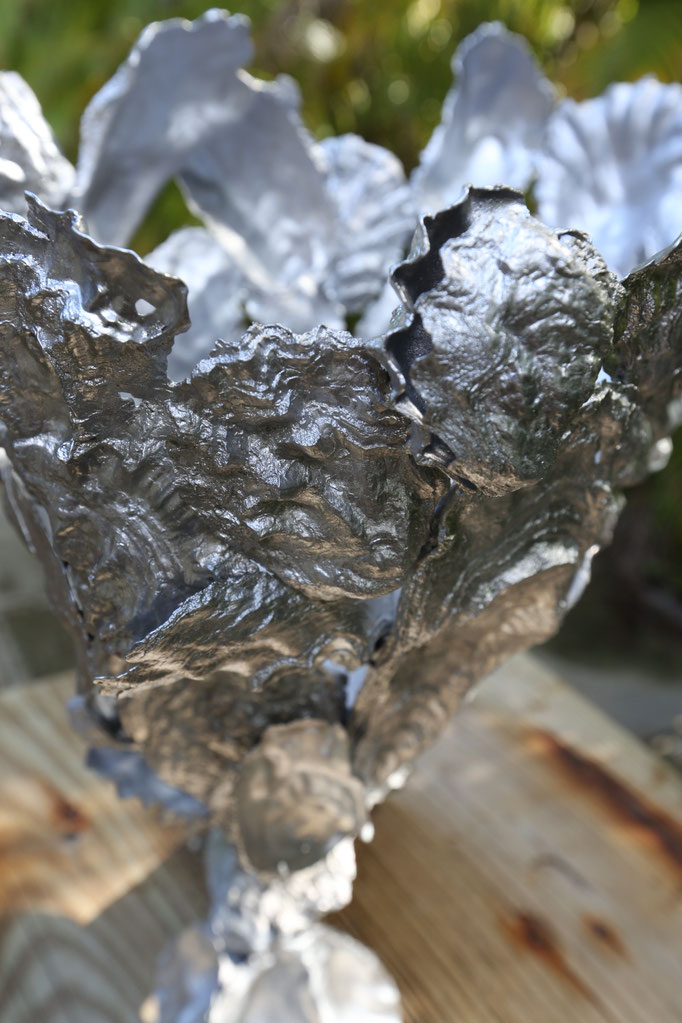 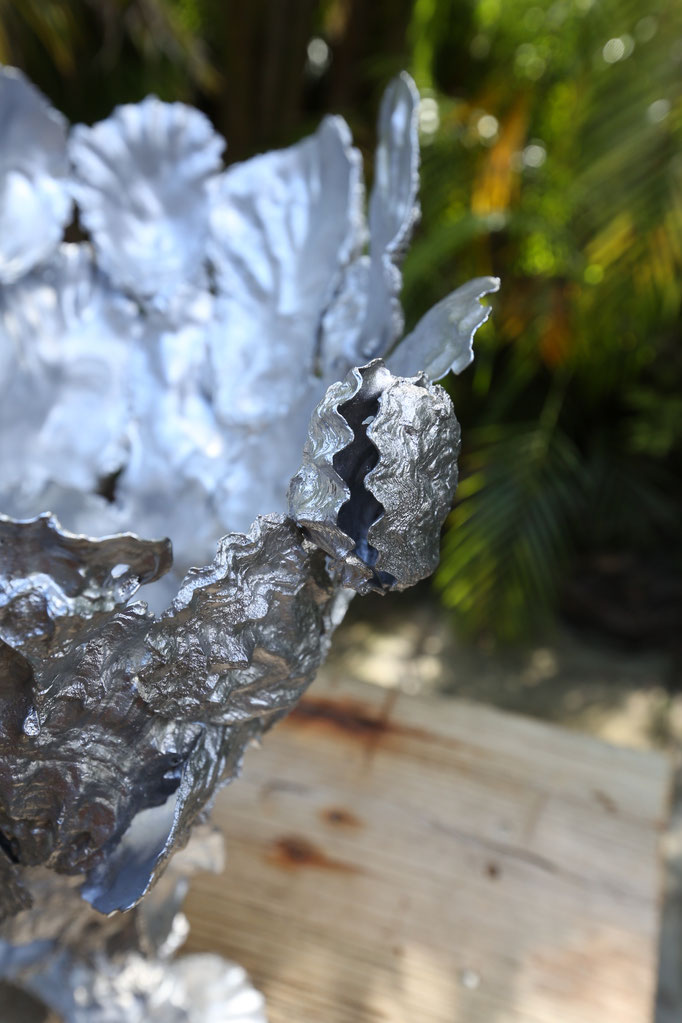